What is Virtual Reality?Virtual reality is an interactive 3D computer-generated experience taking place within a simulated environment which mainly includes auditory and visual feedback. We can explore our own world to feel the presence both mentally and physically. VR system which includes transmission of vibrations and other sensations to the user through a controller or other device is known as Haptic system. This tactile information is generally known as force feedback which is used in engineering, medical, video gaming, and military training applications. A head-mounted display (HMD) fully immerses the user in a virtual world. It has two small high resolution OLED or LCD monitors which provide separate images for each eye for stereoscopic graphics rendering a 3D virtual world. 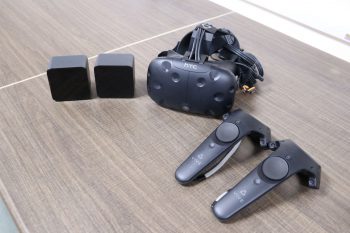 HTC ViveThe HTC Vive is a virtual reality headset developed by HTC and Valve Corporation. The headset uses room scale tracking technology, allowing the user to move in 3D space and use motion-tracked handheld controllers to interact with the environment. Vive Base Stations are known as the Lighthouse tracking system which has two black boxes that create a 360 degree virtual space up to 15x15 foot radius. The base stations emit timed infrared pulses at 60 pulses per second that are then picked up by the headset and controllers with sub-millimeter precision. Vive Controllers have multiple input methods including a track pad, grip buttons, and a dual-stage trigger. Across the ring of the controller are 24 infrared sensors that detect the base stations to determine the location of the controller.

Oculus RiftOculus Rift is a virtual reality headset developed and manufactured by Oculus VR. Constellation is the headset's positional tracking system in 6 DOF. It tracks the position of the user's head consisting of external infrared tracking sensors that optically track specially designed VR devices. The motion controller system is known as Oculus Touch. It consists of a pair of handheld units each containing an analog stick, three buttons, and two triggers. The controllers are fully tracked in 3D space by the Constellation system, so they may be represented in the virtual environment. Each controller features a system for detecting finger gestures of the users. 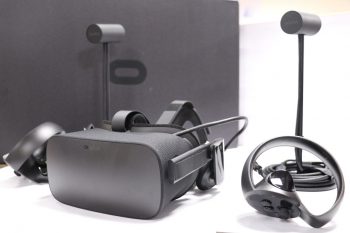 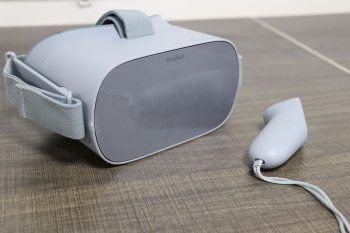 Oculus GoOculus Go meant to exist between the phone-powered Samsung Gear VR and PC-powered Oculus Rift. As a standalone system, meaning it doesn't need to connect to anything, Oculus Go offers something unique. It has 3 degrees of freedom tracking and a small controller that can be moved like a laser pointer. Oculus Go has two storage configurations available, with 32GB/64GB of internal storage. The headset has built-in surround sound with two spatial audio speakers, and the headset also has a 3.5 mm headphone jack for stand-alone headphones.